Home All In the support of Truckers Against Trafficking Kenworth T680 will be auctioned off in Phoenix on May 17, 2019
AllEnglishFeaturedNews

In the support of Truckers Against Trafficking Kenworth T680 will be auctioned off in Phoenix on May 17, 2019 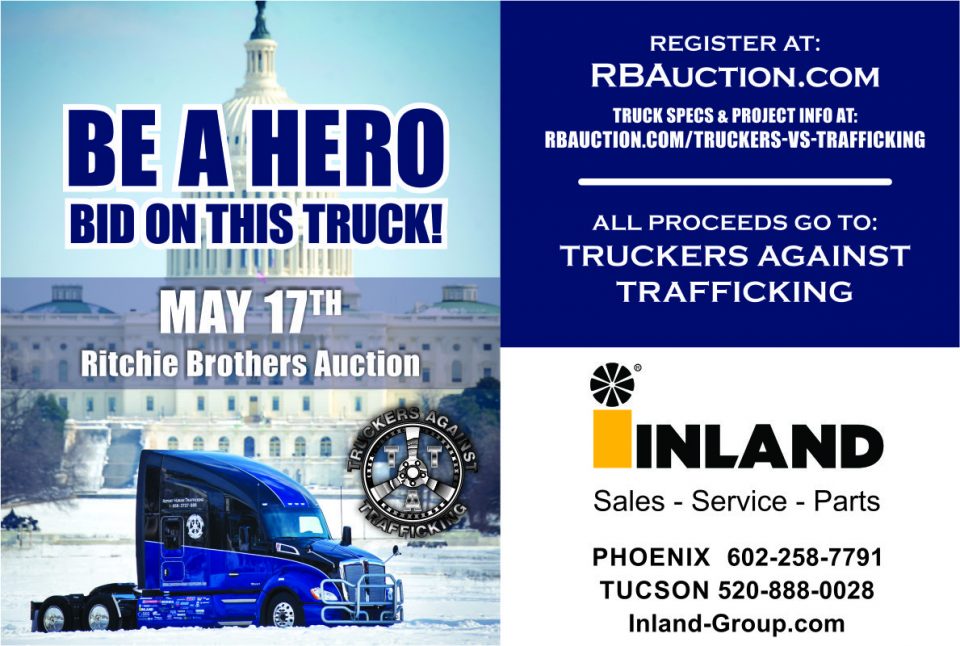 The project, in conjunction with Truckers Against Trafficking (TAT), has received significant support from platinum sponsors Kenworth Truck Co., Inland Kenworth and Ritchie Bros., along with other leading industry suppliers.In an effort to further educate and fund efforts against human trafficking, Inland Kenworth has once again put together a special “Everyday Heroes” Kenworth T680 with a very distinctive paint scheme and signage.

Proceeds from the sale of the Kenworth T680, which has a retail value of $162,000, will go directly to TAT – a 501(c)3 non-profit devoted to stopping human trafficking by educating, mobilizing, and empowering the nation’s truck drivers and rest stop employees.

Don Blake, who serves as new truck sales manager at Inland Kenworth-Phoenix, is again spearheading the effort. Blake said he’s been touched by the industry support for the Everyday Heroes Truck.“This started out as an idea in 2017 that got rolling, and it was a great success. Now, the sponsors we’ve worked with again are so supportive. It shows our industry’s true colors to pull together to raise money for a great cause,” Blake said. “I’m especially appreciative to Kenworth. When I reached out to see if they would be a sponsor again, they were more than happy to help. Kenworth has been great to work with.

Blake’s initiative to contribute to TAT’s efforts led to an expanded role with the organization.  “Don became a TAT board member shortly after the 2017 auction,” said Kendis Paris, executive director of Truckers Against Trafficking. “Not only did we ask him to join the board due to his tremendous work on the Everyday Heroes Truck, but because Don is a true TAT champion. He believes deeply in the mission and enlists his resources and ideas.”

In the United States alone, profits from the crime of human trafficking are estimated to be worth $32 billion.

“Each year, more truck drivers and truck stop operators are added to the network of TAT trained and educated members – over 663,000 to date,” Paris said. “They are our eyes and ears out on the road and are relied upon to report suspicious activity. ”Through the national hotline (888-3737-888) operated by the National Human Trafficking Hotline, 2,250 calls have been made by truckers alone since the program began in 2009. So far, we’ve had more than 600 likely human trafficking cases, involving over 1,100 victims … many of whom are minors.”

More information is available on the TAT website at www.truckersagainsttrafficking.org.