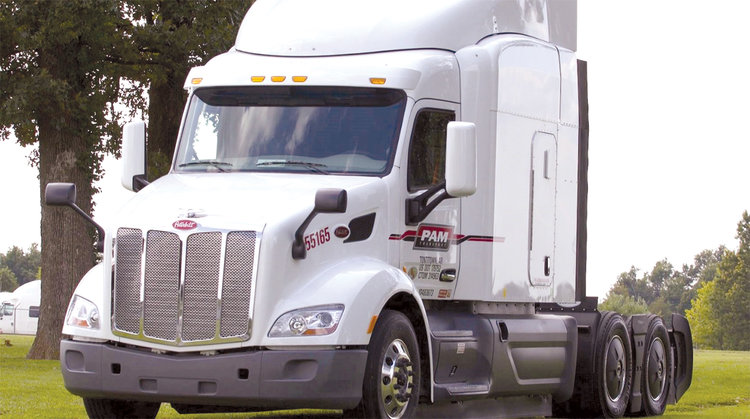 As part of its evaluation process, in 2017 P.A.M. Transport first conducted testing on FlowBelow products with 5 trucks, then followed that with a large-scale test on 200 trucks.  For the 200-truck test, 100 of P.A.M.’s new Peterbilt 579’s were spec’d with FlowBelow from the factory, and the other 100 did not have the system.  After nearly a year of testing, the 100 trucks with the product demonstrated a 2.20% average fuel savings as compared to the 100 trucks without the product.

“For any fuel-saving technology that we consider, we first look to see what the OEMs are doing,” said Paul Pettit, Vice President of Maintenance at P.A.M. Transport. “A demo truck that we received with the FlowBelow system performed extremely well and piqued our interest.  We then tested 5 FlowBelow units as an initial pilot.  That was followed by a more serious 50-50 test on 200 trucks and we confirmed the savings as well as the durability.  After validating the product, we requested it through our dealer, The Larson Group (TLG), for new truck orders.  TLG has since begun delivering our trucks with the product already installed, thereby saving us time and money.”

P.A.M. Transport is a SmartWay Transport Partner and operates a fleet of modern, efficient trucks and trailers.  The company invests substantially in training its drivers to achieve better fuel economy as well as its efforts to constantly improve the efficiency of its equipment.  According to P.A.M.’s CEO, Dan Cushman, “We believe that our pursuit of fuel efficiency is a necessity and that reducing costs is always a priority.   We have a program called ‘Mission MPG’ which has helped us save an estimated $3.5 Million in fuel.  In bonuses and prizes, we give almost three-quarters of a million dollars back to our drivers every year.”