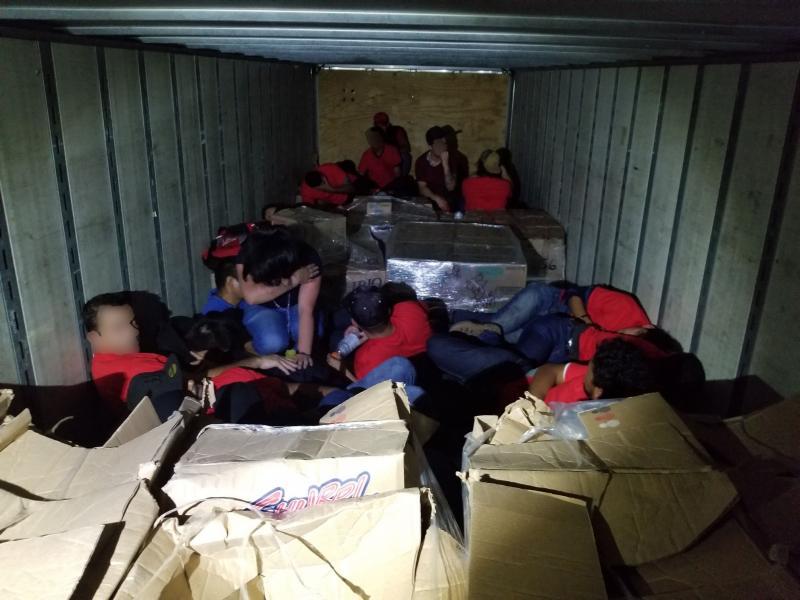 On September 5, agents at the Border Patrol Checkpoint on Interstate Highway 35, north of Laredo, Texas encountered a tractor-trailer at the primary inspection lane.  During the immigration inspection, a service canine alerted to the odor of narcotics and/or concealed humans.  At secondary, agents broke the seal to the trailer and discovered 55 individuals concealed amid the commodity being transported.

The conditions inside the trailer were potentially lethal with an internal temperature of nearly 100 degrees and limited airflow.  The 55 subjects were found sweating profusely and were immediately evaluated by an Emergency Medical Technician.  All were found to be in stable health conditions and identified as being illegally present in the United States.  The individuals

were from the countries of Mexico, Guatemala, Brazil, Honduras, and Nicaragua.  The male driver, a United States citizen, was arrested and the tractor-trailer was seized.

“The United States Border Patrol not only protects the nation’s borders but also ensures those who cross into the United States illegally are treated humanely.  We will continue in the disruption and deterrence of any careless tactics utilized by smugglers,” said Laredo Sector Acting Chief Patrol Agent Jason D. Owens.

To report suspicious activity such as alien and/or drug smuggling, download the “USBP Laredo Sector” App or contact the Laredo Sector Border Patrol toll-free at 1-800-343-1994.