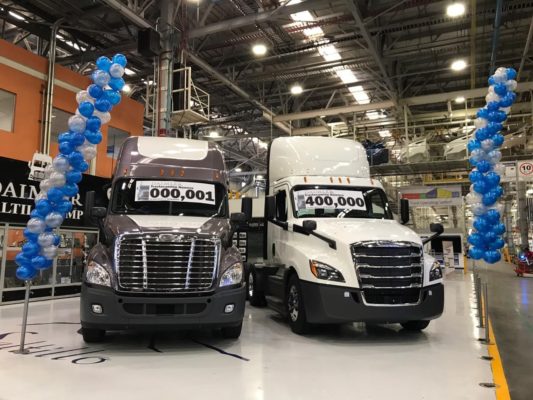 As Mexico braces for the first installment of what U.S. President Donald Trump has threatened would be escalating tariffs, the trucking and automotive industries are warning that the move would have devastating effects on their sectors.

Trump said last week tariffs would start at 5% on June 10, steadily rising until it reaches 25% on Oct. 1 unless Mexico stops immigrants from entering the U.S. illegally.

Frantic negotiations between U.S. and Mexican officials are underway in Washington to avert the tariffs and a possible trade war, but no breakthrough has been reported so far.

Trade between the two countries was worth $671 billion in 2018, according to the Office of the U.S. Trade Representative.

The American Trucking Associations estimates that the trucking industry moves $720 billion worth of goods across the borders with Canada and Mexico annually.

The group has urged the White House and Congress to support free, open and fair trade between the U.S. and its neighbors.

“Keeping our borders open for business for free and fair trade is important to our nation’s economy, and is vital for the more than 47,000 Americans who work in trucking-related jobs supported by cross-border freight movements between the U.S. and Mexico,” ATA said in a statement emailed to Truck News on Friday.

“With China continuing to be problematic, we know that there had been some shifting of sourcing to Mexico, so potential tariffs on Mexican imports raise important questions,” said Eric Starks, chairman and CEO of FTR.

“Either we lose this freight, see increased costs, or both.”

The tariffs will hit the auto industry hard because Mexico is a key production hub for automakers and the largest source of U.S. vehicle and auto parts imports.

Daimler and Navistar have major manufacturing and distribution centers in Mexico. Carmakers including Ford, Volkswagen and Toyota, lost $17 billion in market value the day after Trump tweeted his tariffs threat, according to Bloomberg.

The Motor and Equipment Manufacturers Association has said that the tariffs will undermine U.S. economic stability.

“Tariffs on Mexican goods coming into the United States will only serve as an additional tax on the American people by increasing the cost of goods and putting jobs and investment in the U.S. at risk,” it said.

“Widely applied tariffs on goods from Mexico will raise the price of motor vehicle parts, cars, trucks and commercial vehicles – and consumer goods in general – for American consumers.”

Tariff war with Mexico would hurt the U.S. trucking industry

Do you trust autonomous vehicles?

Einride to use smart-sensing tires from Bridgestone